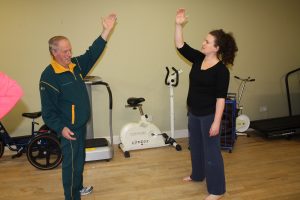 An exhibition and video work, produced by the Luisne Art Group in Ballinrobe. Arising from a series of Movement and Dance Workshops facilitated by artist Rachel Parry alongside ongoing visual arts workshops facilitated by artist Breda Murphy, this new work encouraged the artists to work with physical movement and big gestures. They produced large-scale type artworks which were bold and colourful.  The exhibition and DVD were launched at an event in Tacú Family resource centre, Ballinrobe on December 3rd. The artworks were later installed in the grounds of The National Museum of Ireland – Country Life, Turlough, for the duration of Feile Na Tuaithe, seen by over 25,000 visitors. Click here to view the video

“Luisne artists had the opportunity to engage for the first time in dance movement workshops This provided the group with a chance to experiment with a new medium, which in itself proved challenging at times but equally encouraged members to test themselves in a supported manner”. —“Dance movement by its nature as a new medium meant the engagement of the body, and a requirement that members would become increasingly aware of their own bodies and their movement. … These workshops provided inspiration for a visual artistic response to this increased awareness”. (breda Mayock, Luisne coordinator)