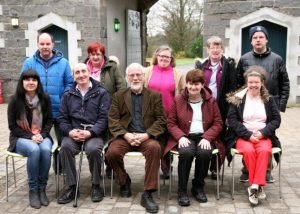 A series of skill sharing workshops in film and painting facilitated by artist/facilitators Breda Murphy and Silke Kauther to 12 members of the Luisne Art Project, Ballinrobe and the Scannán Technologies group, Ballina. The groups came together to experience each other’s work, swop skills and make an istop animated motion film. The project, entitled The Gift saw Luisne artists in their art studio joined by Scannan artists who came with their film cameras. The artists exchanged knowledge and ideas around their own unique work practices. Luisne artists demonstrated how they paint, draw, create their art pieces and Scannan artists showed how they use a camera and demonstrated the process of making an istop motion film. The workshops culminated in an exhibition of paintings and an istop motion film in the cafe and audio room of the Museum of Country Life, Turlough park, Castlebar which was launched to an audience of 70 on 3rd December. The exhibition ran until the end of January 2016.

“The Luisne artists had already seen Scannan’s film – Silent Moves, so they were excited about working with them. The interaction between the two groups was positive and lively”. (Breda Mayock, Luisne Art Group coordinator)

” The film was made about what the artists like most about Christmas and what part they are best at and the last part of the film is about gift giving – so it all interlinks and entwines in a meaningful way  together”.