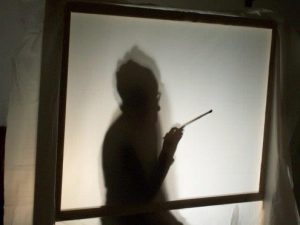 A collaborative project made up of a series of 16 half day workshops facilitated by artists Grainne O’Reilly, Caroline Masterson and photographer Michelle McCarron, with artists from Carrowbeg Enterprises, Westport, culminating in the filming of Drawing the Greenway, a 10 minute shadow show, based on The Greenway. The film was contemporary to the Greenway as it is today, yet reminiscent of old black and white films and overlaid with piano music by Aisling Smith. The film was shown to an audience of 56 on 3rd December. The work also formed part of the Custom House annual end of year Winter Exhibition.

“It was reassuring to observe how well the participants engaged with the idea of making a shadow show from their drawing and printmaking imagery, and how easily they adapted to the idea of recording the shadow on video. They obviously enjoyed the video and were able to make a connection between the process of drawing, printing, cutting out, making the shadow show and the recorded video”. (John McHugh, Director, Custom House Studios)