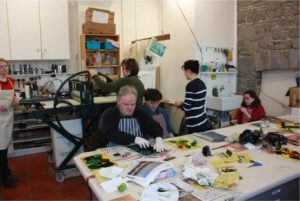 A series of eight screen-printing training workshops for service users from Carrowbeg enterprises facilitated by artists Caroline Masterson and John McHugh at the Custom House Studios, Westport. The workshops culminated in an exhibition of artwork which was launched on 24th February 2011.

“Throughout the workshops the participants grew in confidence and were proud of their work. They produced enough excellent quality work to hold an exhibition which proved to be a great success. The workshops were so successful that we were asked to extend the project by the participating group”. (John Mc Hugh, director, Custom House Studios)